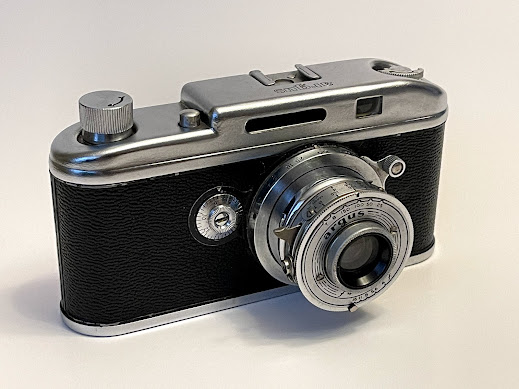 Argus A3
The Argus A3 is an American 35mm viewfinder camera produced from 1940-1942 in Ann Arbor, Michigan. It is distinctly different from most other Argus cameras due to its streamlined appearance.

The body of the camera is made of stamped aluminum with an embossed black leather-type pattern over the middle section.

The A3 is permanently fitted with an Argus Anastigmat 50mm f/4 lens (very similar to the Cintar found on the C3). It is very sharp for its range and good quality enlargements up to 8x10in. can be easily be made.

The shutter equipped is like most other A-series cameras, an Ilex Precise with a continuous speed range (meaning that intermediate speeds are possible) from 1/25-1/150s, as well as Bulb and Time modes. A cable release socket is located beneath the shutter release.

The viewfinder found on the A-series camera is just about the same as that found on the C3; it is small. but very bright. There is no rangefinder on this camera, but there is an extinction light meter on the top of the camera. Six windows of gradually increasing density are mounted on the top; the resulting number that just appears in a window is then applied to the exposure calculator on the back. The proper exposure may then be read off the exposure calculator. I have found this meter to be very accurate. There is also an accessory shoe on the top of the camera to mount an accessory rangefinder if needed.

Focusing of the lens is achieved by turning the collar around the lens barrel with the knob on its side. It will focus down to the exceptionally small distance of 15 inches. The lens will focus as one unit, thus resulting in greater sharpness throughout the whole focus range. The lens barrel may also be pushed in and the collar rotated slightly to collapse it for travel. This makes the whole camera very small.

The camera is opened when the catch on the bottom is rotated. The back will remove completely. Like the C3, it is very easy to get bonus shots on a 36 roll. The takeup spool in the A3 is loose, allowing for cassette-to-cassette loading, alleviating the need to rewind. The film is advanced by depressing the silver button on the top of the camera. This allows the winding knob to be rotated and will automatically stop at the next frame. The number of remaining shots is indicated by the rotating number wheel and pointer on the front. To rewind, all that is needed is to turn the rewind knob. There is no need to release the film, as the sprocket is ratcheting and will release in the rewind direction.

The A3 is quite the curious camera. I have heard anecdotal evidence that the great majority of A3s were sold to the Army Air Corps during WWII for use in North Africa. This makes complete sense: the streamlined appearance and collapsing lens allows the camera to be easily slipped in a pocket, the camera can be used with one hand, the cassette-to-cassette loading method, and its built-in light meter all contribute to efficient use during a flight. Some were sold to the general population, however, and another variant (the Argus CC or Color Camera) with a selenium light meter was introduced as well. 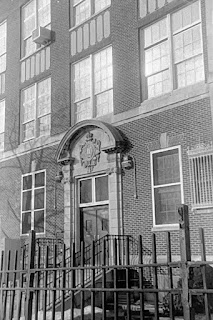 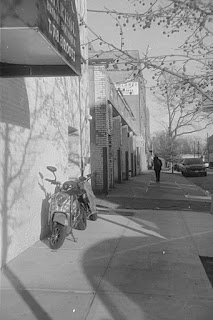 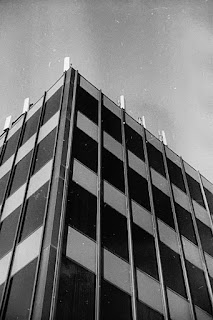