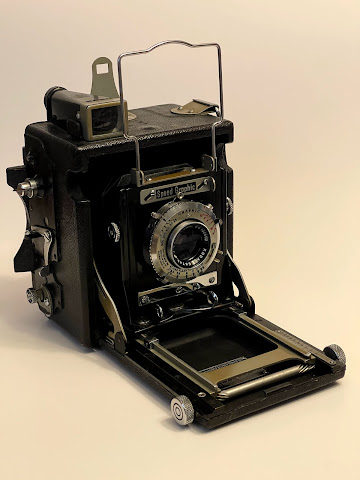 The Graflex Miniature Speed Graphic is an American field view camera produced from 1939-1946 in Rochester, NY. It takes 2x3in. sheet film loaded in ASA holders. It is a smaller version of the immortal 4x5 Speed Graphic.

The miniature speed graphic was available with several lenses and shutters. Mine is equipped with a Kodak Ektar 101mm f/4.5. This is an exceptionally sharp lens, comparable with top contemporary European designs. It is mounted in a Kodak Flash Supermatic shutter, with speeds 1s to 1/400s, Bulb and Time. It has a press view button on the side as well as the flash sync cocking lever. The flash sync speed can be changed from M to F with a selector on the front. The flash plugs into the forked terminal on the shutter. Its apertures range from f/4.5 to f/32.

There are three ways to compose an image with the Speed Graphic. The most iconic way is using the wire sports finder on the top of the camera; this pulls out and automatically adjusts for focal length as well as any rise, fall, or shift applied. Two white notches indicate parallax correction at six feet. Next, there is a tubular finder that is parallax adjustable. Several masks can slide into the front of it to compensate for different lenses. Finally, there is a ground glass in the back that opens with a trapdoor. This is the most accurate option, and will always work. For focusing without the ground glass, most Speed Graphics have a Kalart rangefinder attached to the side, which is calibrated for the default lens. Focusing us accomplished with either of the two knobs on the bed and can be locked with the lever on the rails.

The Speed Graphic is famous for its curtain shutter in the body. This is a complicated affair that involves choosing a curtain aperture and shutter tension from a chart on the bed of the camera, then transferring this data to knobs on the side, where there is also a shutter release lever.

I've managed to get this camera for a very decent price with a film holder included. My example appears to be new-old-stock or hardly if ever used. I have gotten more than my money's worth out of this camera, and I highly recommend it to anyone doing portraiture or needs a small field camera due to its economy of film size. 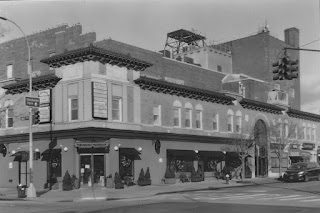 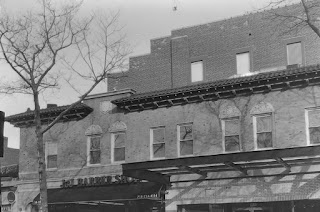