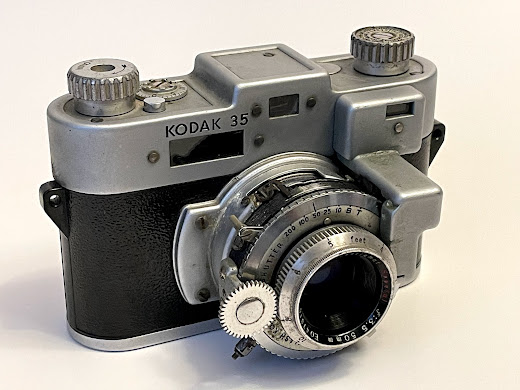 The Kodak 35 RF is an American 35mm rangefinder camera produced from 1940-1948 in Rochester, NY. It was a further development of the Kodak 35; the addition of the rangefinder was meant to compete with the Argus C3, which had locked up the market.

The black part of the body is made of molded Bakelite and the rest is made of stamped metal. It is quite the chunky camera.

Unlike the contemporary Argus models, the Kodak 35 hasn't an interchangeable lens. The lens equipped is the Kodak Anastigmat Special (Anaston) 50mm f/3.5. I cannot speak from experience about the sharpness of this lens because mine came with a few gouges in the front element, but from experience with other similar lenses leads me to suspect that it should be relatively sharp.

Again, where the Argus designs prevail is with the shutter. While they have a continuous shutter range, the Kodak 35s have a Flash Supermatic shutter with speeds of 1/10 to 1/200s, Bulb and Time as well as a self-timer. On models 1946 and younger, there is an ASA flash terminal on the bottom of the lens barrel. Only the front lens element focuses-- yet another thing the Argus (which focuses as one unit) is better at.

To open the camera, the catch on the bottom is rotated; the back then completely removes. Film is loaded like usual and the back is replaced. The film is advanced by depressing the silver button on top and using the knob to wind on. This is when my biggest gripe with this camera is pertinent. The entire operation of the camera is contingent on the film powering a sprocket inside that cocks the stiff shutter. This always rips and chews the film with no exception; this is why I've removed the plate covering the shutter cocking piece, so I can cock the shutter by hand before winding.

By and large, the Kodak 35 RF is a poor excuse for a camera. It is shamelessly trying to take sales away from the much superior Argus C3, yet fails in every way.