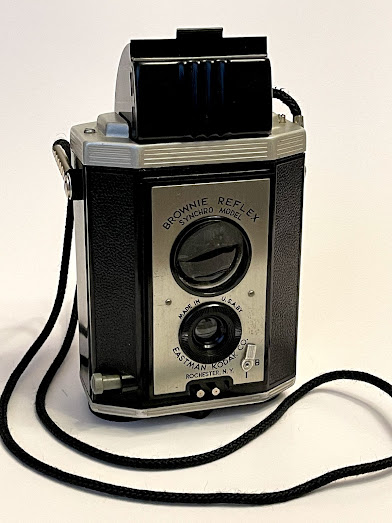 All of the camera save for optics, hardware. and faceplate is made of Bakelite. It can be disassembled through the removal of several screws. A lanyard is semi-permanently attached to the camera with two large screws.

The lens equipped on this camera is a simple glass meniscus, with a fixed aperture of approximately f/11 and fixed focus of 5 feet-infinity. It has a shutter speed of about 1/25s as well as a Bulb setting. A portrait attachment is available, which allows the making of pictures 3 feet in front of the camera.

The composition is made using the large brilliant finder on top, which is revealed by flipping the hood up. To make an exposure, the shutter release on the side is depressed.

A flasholder that takes SM flashbulbs is available (see picture below), and clips to the side while the sync cord plugs into the terminals at the front of the body.

To load film, the catch on the back is flipped, allowing the base of the camera to fall out. The film is then loaded and the base replaced. Frame spacing is determined through the use of a ruby window near the disassembly catch. Winding is done with a knob located on the bottom of the camera, next to the tripod mount. 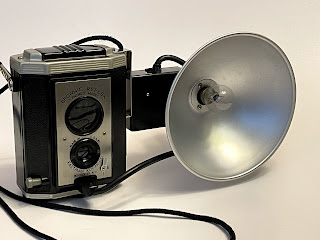