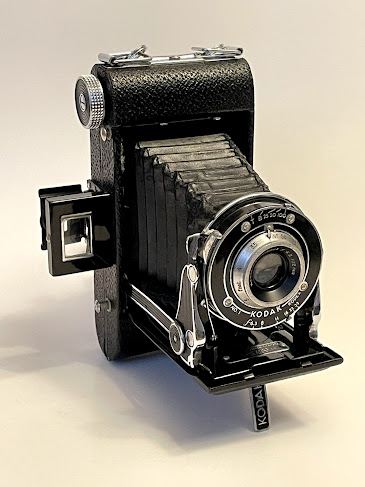 Its body is made of stamped metal except for the bellows, which are made of a cloth covered in a leatherette-type material.

All Kodaks Senior Six-20 came with a Kodak Anastigmat 102mm f/6.3 lens (three elements). This lens, for its range, is actually quite sharp. There was a choice of two shutters to go with this lens: the Kodamatic shutter, with speeds 1/10 to 1/200s, Bulb & Time, or the Kodex Shutter with speeds 1/25 to 1/100s, Bulb & Time (The shutter mounted on my example). It is to be noted that the Kodamatic shutter needs to be cocked, while the Kodex shutter is everset. The shutter may be fired from the button conveniently mounted on the body of the camera, cable release socket, or from a lever on the shutter itself (I've never understood why this option is present, since using it makes your hand block the viewfinder).

There is only one viewfinder on the Senior Six-20. This is a flip-up style sight with two glass elements. This is very advantageous for those who are used to more modern cameras, since waist-level finders take a bit of acclimation to. In addition, this makes this camera fantastic for action shots.

The back opens with a latch on the top of the camera, allowing it to hinge open. Film is then loaded, and spacing is determined using a ruby window, which has a little trapdoor to prevent exposure. Winding is accomplished by using the silver knob on the side of the camera.

Per its name, this camera takes now discontinued No.620 film, which is the same as No.120 except for the spool. It is widely said that a No.120 spool can be filed or clipped down to fit a 620 camera, but this is problematic due to the No.120 spade hole on the spool is much larger than the No.620 spade hole. Therefore, when I use this camera I spool the 120 onto old 620 spools in the dark, which works perfectly. I would like to mention that this camera will NOT work with more modern plastic No.620 spools, since there is a very small tolerance in the film compartment.

This particular camera was my Great-Grandfather's from 1937-1956 (when he upgraded to a Voigtländer Vito B). I have used this camera to good effect and will continue to do so in tribute.