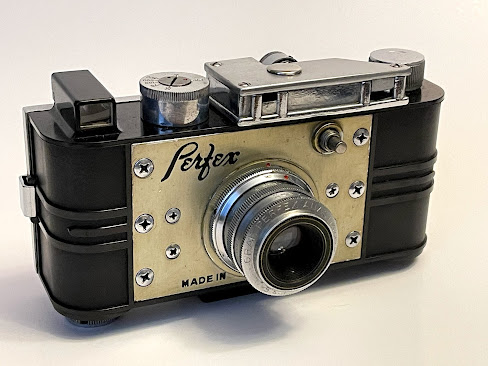 The Perfex Speed Candid is an American 35mm rangefinder camera made in 1938 in Chicago, Illinois. It was the Candid Camera Corporation's first camera, and it was only made for one year. Many consider this camera to be the ugliest camera of all time.

The main body is made of molded Bakelite, with metal parts throughout. Its styling is a copy of the Argus A, but its build quality is tenuous and it is much, much bigger and heavier.

There is a lens mount, but only one lens was ever made for the Speed Candid, the Graf Perfex Anatrigmat 50mm f/3.5, a mediocre middle-of-the-road lens that will do its job, but nothing more.

The main allure of the Speed Candid is its focal plane shutter with speeds from 1/25 to 1/500s with Bulb. This isn't the most reliable mechanism ever made, and mine is a bit sticky on some speeds. The speed is selected by pulling up on and rotating on the large silver knob on the top of the body; this can be done before or after cocking, which is done by rotating the knob without pulling it up. For a cable release, there is a small screw device that screws on above the shutter release button on the front of the camera (on my example, this is missing).

The viewfinder is located on the top of the camera and is nothing to write home about. On the other side is the uncoupled rangefinder that operates with a small knob on the back. On the bottom of the camera is an extinction meter, from which the information is put into the exposure calculator on the back.

The back of the camera removes completely with two catches on the back. Film feeds from right to left like the Argus and winds on with a similar knob and release button on the top. The amount of film that needs to be pulled out in the light is long, which may cause a loss of a frame or two.

I do not care for the Speed Candid. It is a clunky boat anchor of a camera that doesn't perform especially well. Above all, it is uncommon and expensive now, and therefore not worth going out of your way to get.