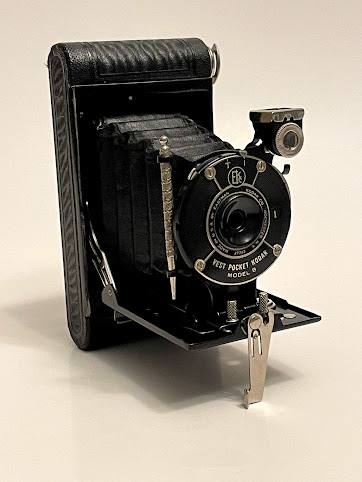 Vest Pocket Kodak Model B
The Vest Pocket Kodak Model B (VPK) is an American folding camera produced from 1925-1934 in Rochester, NY. It takes 8, 15/8 x 2 1/2in. pictures on a roll of No.127 (Vest Pocket) film. It is a revision on the immortal VPK from WWI, the iconic soldier's camera. This model is essentially the same overall design as some folding Hawkeye cameras.
The body of the camera is made of stamped metal with the bellows being made of a leatherette covered cloth.
Similar to some of the contemporary folding Hawkeye cameras and box camera models, the VPK has a simple meniscus lens. This is adequately sharp for contact prints and small enlargements. This is mounted in an unlabeled shutter, but it is identical to the KODO shutter mounted on the related Hawkeyes. This is similar to a rotary shutter, but it doesn't have a rotating disc; instead, it has a sector that rotates up and down, but still actuated by the same to-and-fro action of the shutter lever. This shutter has Instant (1/25s) and Time modes, selectable from a little pointer on the top of the shutter can. The shutter has a built in aperture selector, which is just a rotating wheel on the side of the shutter can. There is a window on the front of the shutter that displays the number (1, 2, 3, 4) of the selected aperture (f/11, f/16, f/22, f/32, respectively). The wheel is rotated to select the desired aperture.
The VPK Model B is opened like several other models, with the sliding latch on the bottom of the front of the camera. This is slid to the right and the front of the camera removed to load film. The VPK Model B is also an autographic camera, which means it has a trapdoor in the back of the camera, allowing the camerist to write on the autographic film (discontinued since 1934). This trapdoor is the 1st type, where it is opened by inserting the stylus (held on the front standard of the camera) into a divot and sliding down. Winding of the film is accomplished with the knob on the side and spacing determined with a ruby window on the back.
There is a single viewfinder on the camera, and it is located on the front standard. It is of the brilliant finder type and may be rotated for portrait or landscape images. For what it is, the viewfinder is pretty decent, especially since my example is new-in-case.
My particular VPK came to me with a leather pouch that is stamped with the gilded name 'Claude G. White', perhaps a retirement gift. There was not a speck of dust on it and no wear marks whatsoever, so it was obviously never used. 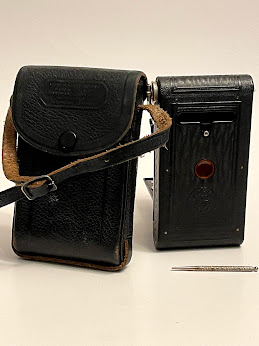