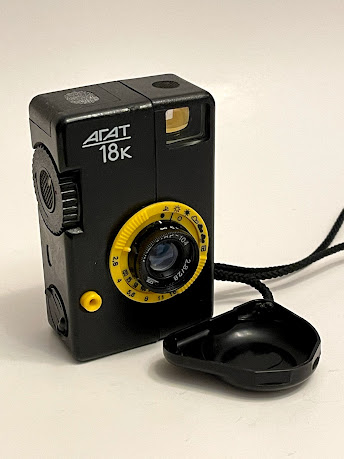 Belomo Agat 18K
The Belomo Agat 18K is a Soviet half-frame camera produced from 1988-1997 in Minsk, Belarus, It takes standard 135, 35mm cassettes and takes 18mm x 24mm frames. It is a minor revision to the Agat 18, which lacked the cable release socket and larger black lens cap.
The entirety of the camera except for the mechanisms is made of molded plastic. Since the camera is so small and very lightweight, this doesn't impact the durability of the camera-- I have dropped mine a few times without even a scratch.
For such a cheap camera (designed for teenagers), the Agat has a somewhat paradoxical lens. It is the Industar 104 28mm f/2.8, a three-element glass lens based on the Cooke Triplet. It is a theoretically great lens for such an inexpensive model, but in my experience, it is mediocre at best. There is a tethered lens cap that comes with the Agat, which is part of the lanyard assembly, which screws into the tripod mount.
The controls of the Agat are a bit strange to those who have never used one; there are two concentric rings around the lens. The inner ring sets the GOST or ASA of the film and the outer ring sets the lighting condition. These are just sunny-16 settings, which actually work quite decently. The GOST ring determines the shutter speed while the condition ring sets the aperture, which can be read with the numbers on the bottom of the ring for use with the hyperfocal scale on the focus ring. The lens focuses by twisting it, and there are numbers on the lens barrel for determining distance. The shutter is released using the coloured button on the front of the camera. Flash is synchronizable with X-sync using the hot shoe on the top of the camera.
To open the Agat, the slider on the left side of the camera is slid down and the body split in two (see depiction below). The film is loaded and the two pieces put back together. The film is wound with the large black knob on the side of the camera, which has double exposure prevention. To rewind, the panel in the middle of the knob is rotated to the red position and the rewind crank spun. The winder automatically resets when the camera is opened.
What the Agat excels in is its viewfinder. It is large, bright, and clear, with frame lines and 2m parallax markings. It really is a pleasure to use. What is of note is that since it is a half-frame camera, what looks like the camera is in portrait orientation is actually the landscape orientation.
The Agat 18K is very good at one thing: fun. If that is what you look for, then by all means pick one up. The image quality leaves something to be desired, but it is a very easy and handy camera to use. 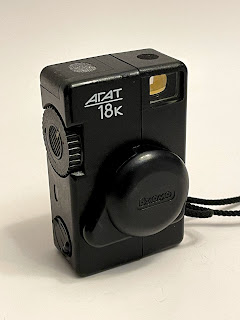 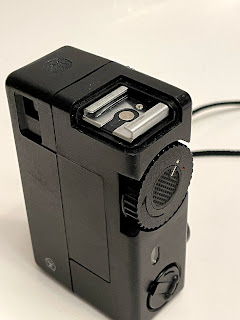 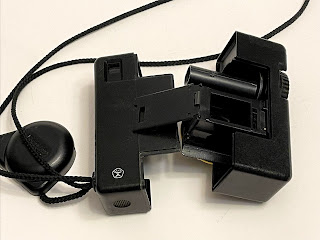 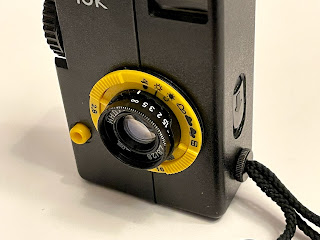 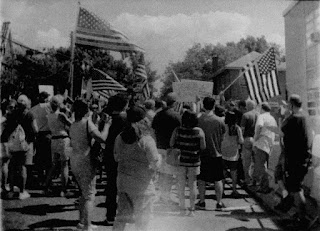 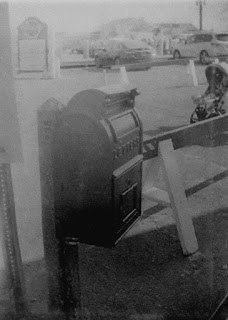 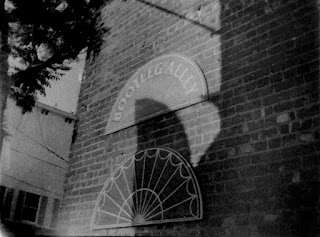