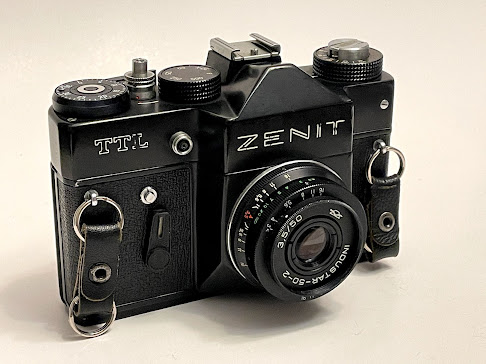 The Zenit TTL is a Soviet single-lens reflex camera made from 1977-1985 in Krasnogorsk, Russian SSR. It uses standard 135, 35mm cassettes and is one of several Zenit cameras produced over the years.

The entire camera is made of metal, and it feels very solid. It is a well made camera, but so is the Praktica Super TL3 which is but a fraction of the weight. The wrap around the main body is made of leatherette and is quite robust.

Any M42 lens may be mounted to the Zenit, as it has a run-of-the-mill M42 mount. Here it is depicted with an Industar 50-2 50mm f/3.5, which is a Soviet rangefinder lens; the Industar design was a copy of the Zeiss Tessar lens. I have found this lens to be decently sharp for most uses, though its handling is a bit fumbly.

Inside the viewfinder is the titular through-the-lens meter, a simple matchstick meter that is quite effective. To set the film speed, the dial around the rewind knob is rotated to match the desired value. To activate the meter, the shutter release is depressed halfway; this also sops down the lens for depth-of-field preview.

The shutter of the Zenit is lackluster to put it politely. Both my examples broke on the first day of me owning them, as  the shutter cloth came off the spool it sits on inside the camera. Alas, they are both nonfunctional, which is why I eventually procured a Praktica. To change shutter speeds, the black knob on the top of the camera is rotated-- there are speeds of 1/30 to 1/500s plus Bulb. The top of the shutter release button right next to the dial is threaded to accept a shutter release. In addition, a self-timer is located on the front of the body. There is X flash synch available with a Prontor-Compur (PC) socket on the front of the camera. Note that the shoe on top of the prism is not a hot shoe.

To open the camera, the catch on the side of the camera is released and the door swung open. Film is loaded thus far in the normal way. The back is then closed and film wound on using the rapid advance lever on the back. The film counter is reset with the little silver stud on he counter itself. Rewinding is achieved by rotating the collar around the shutter release to the red position and turning the rewind knob.

For composing shots, the viewfinder is pretty middle-of-the-road-- not too large but not too small. It is very comparable to the Praktica viewfinders and is not particularly notable in general.

All in all, do I recommend a Zenit? No. Everything the Zenit can do and more  can be done with much better and less expensive contemporary cameras like my aforementioned Praktica Super TL3. 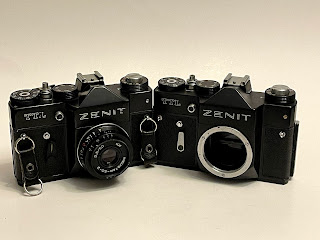 My two Zenit TTLs. Both broken!