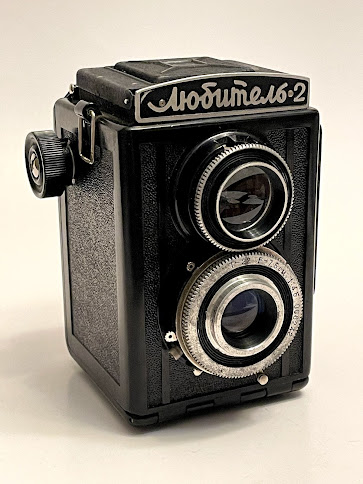 LOMO Lubitel 2
The LOMO Lubitel 2 is a Soviet twin lens reflex camera produced from 1954-1980 in Leningrad, Russia, USSR. It takes 12, 6 x 6 cm photos on a roll of No. 120 film. It is the descendant of the pseudo-TLR Lubitel and the predecessor of the later Lubitel models such as the Lubitel 166. The example depicted here is the domestic Soviet version, which has cursive Cyrillic script on the nameplate instead of the Latin print font used on the export model.
Like many other Soviet cameras, the Lubitel 2 makes extensive use of Bakelite in its construction. The entire body of the camera is made of it and most hardware is made of metal. A small filter holder is molded into the side of the camera.
For such a low-range camera (Lubitel means Amateur in Russian), the Lubitel 2 has a decent lens. It is a LOMO 75mm f/4.5, and produces relatively sharp images. The shutter on the Lubitel 2 has speeds of 1/10 to 1/200s plus Bulb; it needs to be cocked before firing and can be release with the shutter button, cable release socket, or self-timer. Also built into the shutter is the diaphragm, which stops from f/4.5 to f/22. Both the shutter speeds and apertures can be selected using two levers on the side of the shutter can.
To load film, the two silver catches on the rear of the camera are released. The back is then swung open and film loaded. Film is wound on with the black knob on the side of the camera and spacing determined with a ruby window, which has an integral cover that is opened by rotating a knob on the back.
To compose an image, the hood on the top is flipped up to reveal the bright view screen. This is very efficacious because it is actually a giant brilliant finder with a small ground glass patch in the middle to achieve focus. A small loupe can be brought out from the top lid to assist with focusing. The top lid centre can be popped back and locked into place to form a sports finder for rapid action. To focus the lens, the ring around the viewing lens and/or taking lens is rotated. 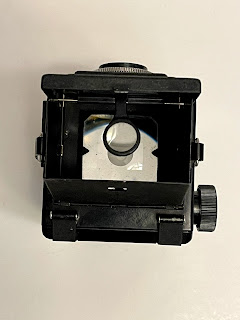 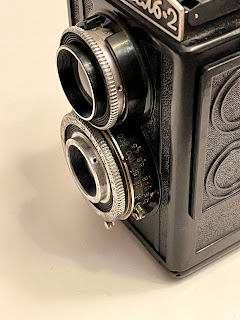 Closeup of Shutter Can and Filter Holder 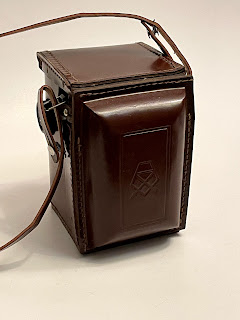 Outside of Case with LOMO Logo 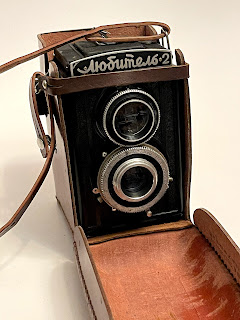 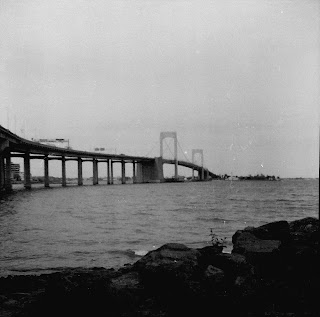 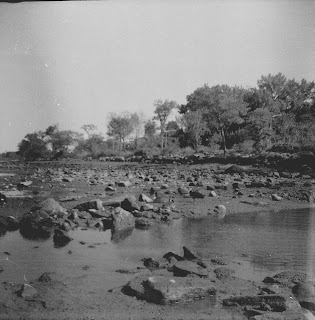